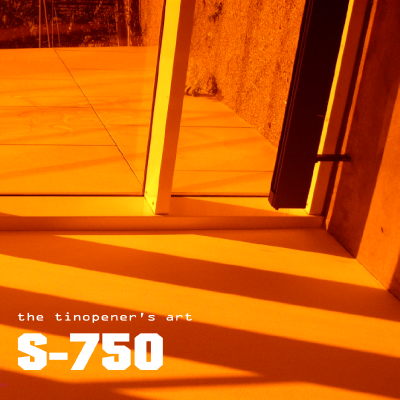 download & listen to all album tracks here on this page or at the following media websites:

alternatively, you can download here the complete album as Zip archive (108 MB) (of course, for free)

The new online album "S-750" (dedicated to the name of an early Roland sampler instrument) provides an overview of the current creative output of the music project the tinopener's art. While they created the electronic sound completely by themselves in their own studio high above the rooftops of Munich, several vocals got support from far away: And so the album is also significantly influenced by the voice and poetry of French artist Julien Auroux. The Internet made possible this cross-border cooperation. Thus, the electronic soundscapes are now combined by the haunting spoken words and vocals of Julien Auroux bringing a touch of Serge Gainsbourg feeling into the songs. Compared to earlier productions, the sound of the album "S-750" clearly reveals that the tinopener's art has recently revamped their studio and overhauled their synth setup: it creaks and cracks, and in total all seems a bit more modern, dirtier and more direct than before. The best example for this is the opening track called eki01: a wonderful rumbling rhythm with a clear Big Beat influence is combined with rap interjections in dancehall style. But also strong dramatising orchestral elements such as in Histoire, Silencieuse and Fabrikation are now part of the new sound world of the tinopener's art.

Stylistically, it still remains difficult to classify this project, because the tinopener's art experiment with too many different styles and genres: you will find synthpop productions (beauté, virtual existence), beside IDM and Trance tunes (les are les autres, Jules et Jim), minimalist electronic club-tracks (Parisienne), wonderfully melancholic trip hop songs (Silencieuse, Histoire, Wuppertal), in addition to strange sinister sound collages ala Amon Tobin (monthy, Fabrikation), which could also be part of a sci-fi soundtrack. Finally, the album even experiments with some rap and hip-hop tunes (Chut, final order). For fans of electronic music, who like cross-genre explorations, defnitively a must-listen.

As usual, the album also takes into account the optical component of art. Thus, the tinopener's art produced an own cover artwork for each track of the album. All artworks and tracks can be downloaded for free from the band's website and the usual online portals.

Covers and information for all tracks

monthy
mp3 192kbps 10 MB 7:11 cover/infos
An experimental soundscape: an electronic rhythm that sounds like a strange guitar, vocoder choirs and a complex collage of sounds outline a gigantic geometric field.

Fabrikation
mp3 192kbps 10.5 MB 7:41 cover/infos
A symphonic work about huge fabrication. Orchestral parts and sound metamorphosis in the style of contemporary classical music mix with electronic arrangement and create an atmosphere like a sci-fi soundtrack.

virtual existence
mp3 192kbps 7 MB 4:55 cover/lyrics
A track somewhere between synth pop and ambient, telling the story of the gap between the virtual existence of a social media entity and the reality.